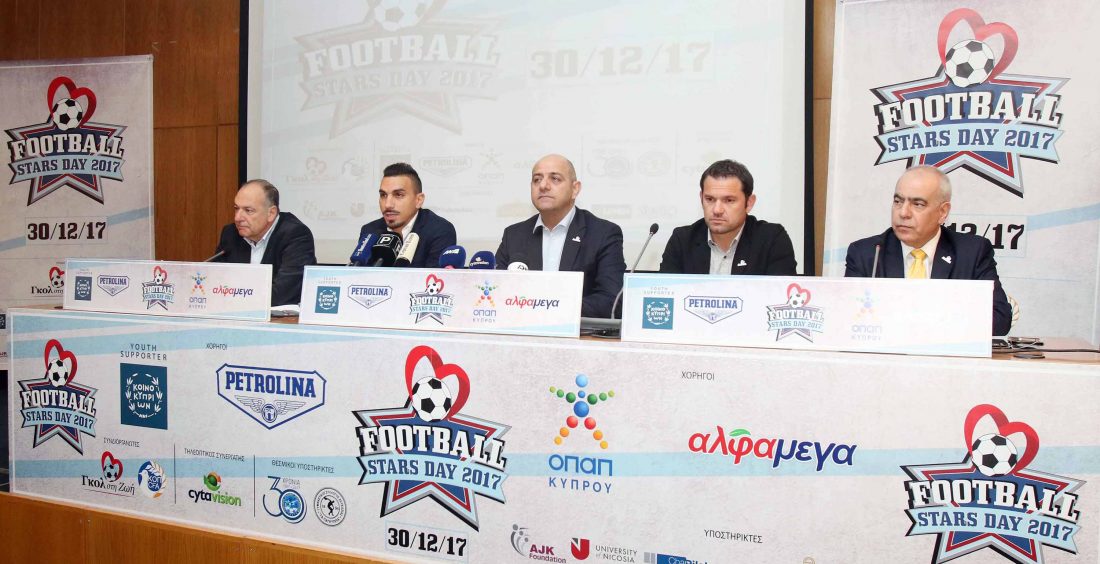 Goal in Life and Cyprus Football Federation are organizing a whole day dedicated to football and social contribution. All profits will be donated for the erection of a new wing in the Makario Hospital.

Charity Organization Goal in Life and Cyprus Football Federation are preparing a special day full of football, social contribution and philanthropy. On Saturday, December 30th, the GSP Stadium of Nicosia will host the Football Stars Day. Thehighlight of the day will be the game between Cypriot and foreign football players of the Cyta Cyprus League, who will be chosen by online voting at http://vote.goalstizoi.org.cy.

All the profits will be donated for the erection of a new wing in the Makario Hospital in Nicosia, which will serve the very important and special needs of the hospital.

The Cause
In the press conference that took place in the GSP Stadium on Thursday (23/11) morning, Goal in Life’s President, Mr. Constantinos Charalambides announced the event Football Star Day, as well as the details and the reasons that have pushed the Cyprus football players to organize such an event. Most importantly, as he stated, the cause of building a new wing for the Makario Hospital is the main reason for organizing the Football Stars Day 2017.

On behalf of the Cyprus Football Federation who is co-organizing the event, Vice President, Mr. HarisLoizides has stated that the Federation is dedicated for the event to succeed, as well as to the cause that the Football Stars Day will serve.

Sponsors and Supporters
Football Stars Day is supported by the Cyprus Association of Football Players and the GSP Stadium. Bank of Cyprus, OPAP Cyprus, Petrolina and Alfamega Supermarkets are the great sponsors of the event. Cytavision is the media partner, who will broadcast live the event. AJK Wealth Management, Char. Pilakoutas, Zorbas Bakeries, Photos Photiades Groups, University of Nicosia, Landas Colour and Semio are also supporting the event. The official partners of the Football Stars Day are PwC, ACS Courier, 7Qm, Think CRM and Opium Works, who has created the online voting platform.

Online Voting
Theonlinevotinghasalreadybeganathttp://vote.goalstizoi.org.cy. Every user can vote only once, choosing a team of Cypriot and a team of foreign players, in a 1-4-3-3 formation. Every squad can contain only three football players from every club.

Day Program
TheAllStarswillplay for 60 minutes, in two 30 minutes half times. Every half time will contain different squads, On December 30th2017, the action will begin from the morning in the GSP Stadium. FunPark, music, games and interactive activities and many surprises will take place around the Stadium area. Football Legends’, Corporate, and Women’s matches will also be played before the All Star Game.